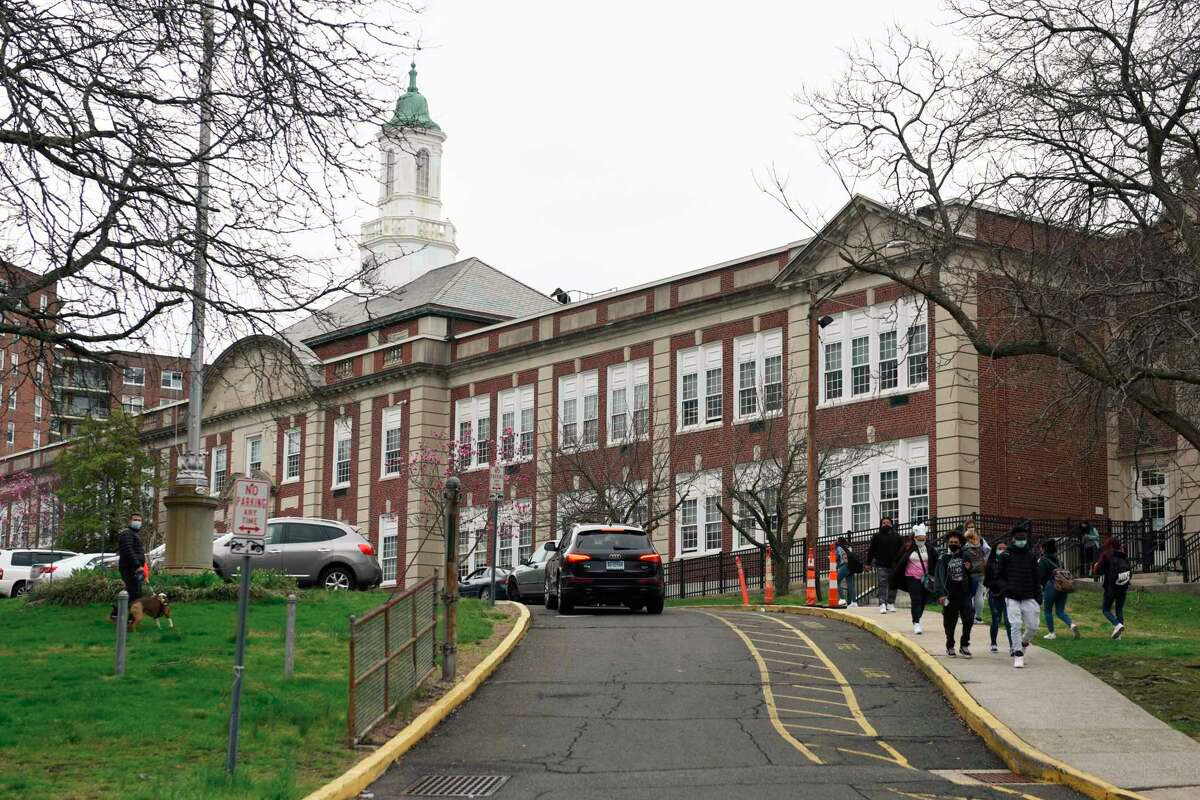 WESTHILL –  On Oct. 21, Westhill High School hosted a pep rally-the first in over two years since the pandemic began. Earlier that same day, a hoax shooter threat terrorized neighboring Stamford High School. The rally occurred without incident, but some questioned whether the event should have happened that day.

At 8:55 AM, Stamford High received an active shooter threat. The school was immediately locked down while district officials worked with law enforcement to determine the threat’s validity.

Less than an hour after SHS received the threat, the lockdown ended at 9:30, and law enforcement officials determined the threat was a false flag. At 10:17, parents and student guardians received an email from SPS detailing the situation at Stamford High. SPS claimed within the email that Stamford Police decided to lock down all Stamford Public schools until they vetted the threat out of “an abundance of caution.”

Not all schools received notification of the lockdowns before the time it took the SPD to vet the threat. Only some schools, such as Stamford High School and AITE, went into lockdown.

According to a press release later that day, SPS claimed it was a “fluid and fast-moving incident” that took the district time to get lockdowns in place. That information came after they had known the threat to be false for more than an hour.

Principal Michael Rinaldi said he never got the call from Stamford Public schools to go into lockdown and thus chose not to.

Rinaldi said he was in immediate contact with Stamford High Principal Matt Forker on the day of the incident.

“[Stamford High] had gone back to a normal day as much as they could, things were moving on. So I felt, ‘Well, let’s go ahead with our day.’ The rest of our day is going to be normal–we’re going to go to class the rest of the day,” Rinaldi said.

“I almost canceled [the pep rally]. I was thinking about it quite a bit.”

“Even if something isn’t an immediate danger, you gotta kinda determine where the energy is at and if people are super concerned or not,” Rinaldi said.

Westhill scheduled the rally for the week before. But due to planning concerns, it was rescheduled for that Friday. Cheer and band had already practiced for the event weeks in advance, and pep for the pep rally was dying quickly as the days inched on. Students had divided responses to the pep rally.

“I think that the event should have been postponed because of the active shooter threat, but I also think that it was a hard enough time in getting it together ‘cause it was canceled last week,” Chase Swain (‘24) said.

At the start of third period, Principal Rinaldi addressed the school via intercom about the false threat, notifying students and faculty the pep rally was still going on as scheduled. That was the only official news about the situation students received during the day other than district emails.

Most information students received that school day was through friends who go to SHS. Snapchat and Instagram Stories were the only ways other students knew what was happening on the ground.

Most students interviewed at Westhill didn’t mind the threat, citing that it was a hoax that wouldn’t affect the school in any meaningful way. When asked if they feared a copycat call coming to Westhill, most didn’t think it would happen.

Many saw the threat as an obvious joke, no more than a nuisance. Girls Field Hockey gave a resounding: “Sucks for us, then,” when discussing what they would do if a threat arrived at Westhill during pep rally day.

“It’s very tragic that things like this are happening, and I think the fact that this has become a trend is so absurd to me, and people making a joke about it is not funny either,” Alex Martinez (‘25) said.

Students packed onto the bleachers, some standing towards the front because of how crowded the bleachers became. Faces were with war paint, sparkles, and glitter to celebrate the occasion. Some saw it as a way to get out of class, but some also felt class was more enjoyable than the rally.

The open nature of the event made some feel nervous, with the threat not helping to calm people’s nerves. “I was actually really scared to come out here, I felt we were an easy target,” Martinez said.

The issue of whether the rally was enjoyable was an even hotter issue of debate. Students in the bleachers mostly responded no, citing the boring atmosphere, the awkward moments of quiet, and even the weather, most having on winter gear with the sun beaming on them.

Some participating in the event, such as the cheer team and other sports teams, felt they were having a good time, but even this was a divisive issue for some.

The larger teams, such as Football and Soccer, had a great time. They ran across the field, hyping the crowd with games and tricks, attempting to make the most of their time in the spotlight.

“I basically lost my voice from screaming and yelling, but it was good enough. We could’ve done more,” JV Wide Reciever Peter Cantave (‘25) said.

“It’s a time where we can all get together, and it’s a time to skip class. Have fun with it,”  Aneisha Ludger (‘26), cheerleader, said.

Rinaldi even participated in a wheelbarrow race with students, after which he started doing push-ups on the turf.

Cross Country athlete, Banks Valentine (‘24), felt that the event was awkward and not much fun.

Some students in the stands felt bitter they were leaving the event empty-handed. Many wanted the free school merch thrown to the crowd via t-shirt cannon. Some in the senior section fell trying to catch the t-shirt Hail Mary-style.

Principal Rinaldi expressed his desire to do the pep rally again in the spring. He doesn’t want to stop at just the pep rally, either.

“I’ve always felt that things like pep rallies, and when we used to do a lip-dub, and the movie night we had the other night, and the homecoming dance, those are the fun high school experiences that kids deserve to take part in. They are traditional high school fun activities,” Rinaldi said. “I’ve always felt a commitment to provide those opportunities for kids but I feel even more strongly now, so much has been missed, the fun part of school.”

“I don’t feel like we’re slowly rolling it back, I feel like we’re back. And as long as our school community still, overall, cooperates […] we’re going to bring everything back.”

Rinaldi also shared his desire to have a movie night in the auditorium upon the release of “Chang Can Dunk,” the Disney+ original movie filmed at Westhill at the end of 2021.

The Westword will release a follow-up article on Westhill’s plans to bring back high school normalcy.

Eugene Caibal and the Westword Editorial Team contributed to this article.